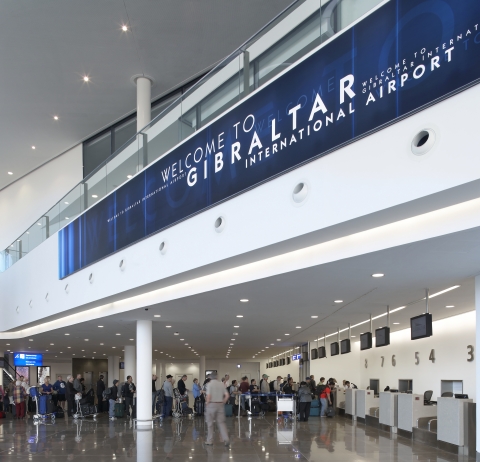 Gibraltar International Airport has once again beaten records on passenger numbers, closing 2016 with 548,230 passengers handled in the calendar year. 2016’s record beat that of 2015 by an additional 103,894 passengers, or 23.4% growth. The majority of passengers, 546,549, travelled on scheduled services, with the additional 1,681 recorded being classed as ‘non-scheduled’ passengers, arriving or departing on corporate services and charter flights.

The busiest day for scheduled passengers handled was Sunday 31st July, with 3,212 passing through the airport, 1,612 on arrival and 1,600 on departure.

Overall load factor for scheduled flights was 78.8%. September had the highest monthly load factor at 84.4%, and January the lowest, at 70.1%.

Busiest routes were broken down as follows:

The Hon Gilbert Licudi QC MP, Minister for Commercial Aviation and Tourism stated ‘2016 has been a bumper year with record number of passengers travelling through the airport, and exceeding the half a million passenger mark for the first time. We continue to ensure Gibraltar International Airport becomes the airport of choice for both visitors and airlines and look forward to continued growth for the benefit of business and tourism development to Gibraltar.’

Terence Lopez, Air Terminal Director added ‘December has been the perfect ending to a record breaking year. I will take the opportunity to thank our airlines and passengers for selecting Gibraltar Airport and our partner organisations at the Airport for helping us achieve such a record whilst still delivering a high standard of service.’