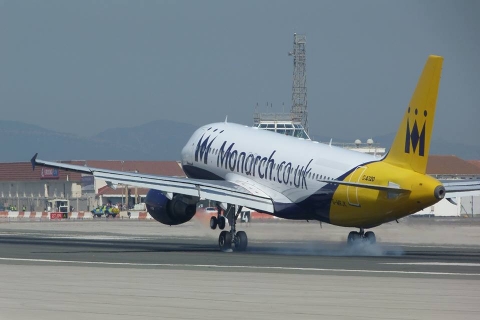 Monarch airline group today announces the launch of flights from London Gatwick to Gibraltar as part of the carrier’s expansion of its network of routes for summer 2016. Offering four flights per week from the London airport, the service will start on 1st May 2016, with tickets now on sale. Flights will operate on Mondays, Thursdays, Fridays and Sundays with a mix of early morning and afternoon departures, offering a total of 1,392 seats a week on the new service.

The Hon Samantha Sacramento, Minister for Tourism commented: "This is exciting news following the announcement of other increases in the number of seats available for flights to Gibraltar next summer. Gatwick has always been a very important route for Gibraltar with a very important catchment area and we are pleased to welcome Monarch to this route. The initiative taken by the airline serves to strengthen the very strong ties and commitment that the airline has had to the Rock. Today’s announcement is expected to increase visitor numbers by a further 30,000 for next year. This summer we also announced record numbers of air passengers travelling to and from Gibraltar. Between May and September we recorded an average growth of 13.5% on the previous year. We shall of course continue to work closely with the industry and explore further growth in tourism. Having enjoyed record numbers last summer we are delighted to close this year with an announcement of even further growth expected by next summer. All in all, the new services represent an approximate 25% growth for next year.”

Monarch’s Gatwick fares start at £89 including taxes and charges.

More information is available on www.monarch.co.uk