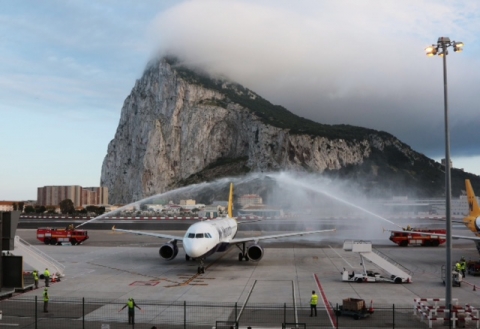 Monarch Airlines last Sunday launched its new service from London Gatwick to Gibraltar.
Operating four times per week on Mondays, Thursdays, Fridays and Sundays, this new service becomes the fourth UK destination served by the airline, joining London Luton, Manchester and Birmingham. The Gatwick service will be operated by the airline’s 174 seat Airbus A320 fleet.

The service was welcomed by a water cannon salute, provided by the Airport Fire and Rescue Service, a first for the airport, but a traditional practice worldwide that welcomes inaugural flights.
Minister Steven Linares MP was also at the airport to welcome arriving passengers, together with Terence Lopez, Air Terminal Director and Nicky Guerrero, Chief Executive of the Gibraltar Tourist Board.

The new service will operate as year round, with four services per week already on sale for this coming Winter season.

Commenting on the launch of the service, Minister for Tourism, the Hon Samantha Sacramento said “London Gatwick is Gibraltar’s busiest destination and we are very pleased to welcome Monarch Airlines on this route, offering a greater choice of weekly departures and allowing growth on this existing destination to further open Gibraltar to increased tourism and business opportunities. Monarch’s confidence and partnership in Gibraltar is shown by this new service becoming the fourth UK destination on offer.

This new service is part of a 40% increase in seats on offer for this summer season, brought about by new route launches and an increase in seat and frequency offerings on existing services, highlighting the Gibraltar Tourist Board’s efforts in increasing air connectivity.”